Knowing that I have a bit of an obsession with the Smitten Kitchen blog, my wonderful boyfriend bought me the new Smitten Kitchen cookbook for our anniversary a few months ago. I’ve cooked a handful of the recipes, some of them multiple times, and stickynoted almost all the rest for future occasions (my real world version of pinning). Everything I’ve made so far has been awesome – I honestly can’t recommend this cookbook enough.

The wild rice gratin with kale, caramelized onions, and baby swiss is one of the recipes I’ve made on multiple occasions. It’s kind of like hearty comfort food, packed with rice, veggies and just the right amount of cheese, and coated with a crisp bread crumb crust. It’s gotten rave reviews from vegetarians and meat eaters alike, and is a relatively easy dish for a midweek meal. 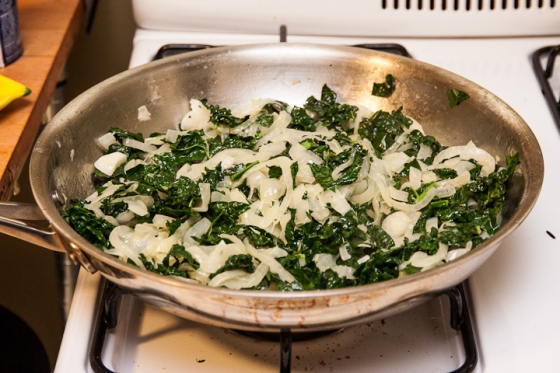 A few notes: I’ve made this with both traditional wild rice and a “wild mix” that had a combination of wild and brown. I preferred the latter because the final consistency was a bit creamier, while the former was on the drier side. I’ve also made this with vegetarian and chicken broth, and the taste wasn’t noticeably different. Obviously, if making this as a vegetarian dish, you’ll want to use the veggie broth.

Wild Rice Gratin with Kale, Caramelized Onions and Baby Swiss
from The Smitten Kitchen Cookbook | serves 10 to 12 (side) or 4 to 6 (main)

Cook the rice according to package directions, and preheat the oven to 375 degrees.

Meanwhile, caramelize the onions. Heat a tablespoon of butter and a tablespoon of olive oil in a large, heavy skillet over medium-low heat. Add onions, sprinkle with 1/2 teaspoon of salt and a little pepper, and cook until they’re tender and sweet, stirring occasionally, about 30 minutes. Add the kale ribbons, and cook until they wilt a bit, about 5 minutes. Stir together the onion-kale mixture, wild rice, and 1 cup of grated cheese in a large bowl. Season to taste with salt and pepper.

To assemble the gratin, first use 1 tablespoon of butter to generously coat a 2-quart baking dish. Spread the wild-rice mixture into the prepared dish and pour broth over it. Sprinkle the remaining 1 cup of cheese on top. Toss breadcrumbs with 1 tablespoon of melted butter Andy salt and pepper to taste. Sprinkle the breadcrumb mixture over the cheese.

Bake for 30 to 35 minutes, or until bubbly and beginning to brown on top.

a background in graphic design, a job in marketing, and an interest in all things creative, culinary, and aesthetically pleasing
Learn More »